Har ki Dun is a cradle-shaped valley at an altitude of about 3,566 meters in the Garhwal Himalayas, surrounded by snow laden mountains and alpine vegetation. The Har ki Dun trek is best known for its spectacular views of some famous Garhwal mountains, like the Swargarohini group of peaks, Black Peak, Bandarpoonch etc., along with the mesmerizing views of the mountain valleys and forests. The trek will also take one through some of the most isolated and remote villages in the country. Another feature which makes this trek even more special is that it can be visited both during the summers as well as winters.

Other notable treks include the Kedarkantha trek, Kuari pass trek and the Rupin Pass trek in Uttarakhand. The Markha valley trek and the Parang la trek in Ladakh, the Hampta pass trek, Triund trek and the Pin Parvati Pass trek in Himachal Pradesh to name a few. The serenity and scenic beauty of the mountains is what inspires trekkers. And mountaineers to set out to explore them, and what nature offers in return is indeed a lifetime experience.

Located inside the Nanda Devi Biosphere Reserve, the Valley of Flowers National Park is considered to be one of the most beautiful treks in Uttarakhand. It is best known for its rich diversity of flora and fauna. It offers spectacular views of the picturesque mountain valleys filled with endemic alpine flowers and different kinds of wildflowers, like calendulas, poppies, daisies, primulas, orchids and so on. A popular trekking choice especially in the monsoons when one can catch a glimpse of the blooming flowers along with the snow laden mountains in the backdrop, the valley of Flowers is also one of the oldest treks in the Himalayas. The trek will lead one through numerous valleys, glaciers and streams, making it an unforgettable experience for trekkers.

The Sandakphu mountain in West Bengal lies on the Singalila Ridge at the Indo-Nepal border. And is one of the most famous trekking destinations in the country. The peak offers spectacular views of some of the highest mountain peaks in the world, including Mount Everest. Other notable mountain peaks visible from the summit include the Kanchenjunga peak (third highest in the world) with its family of peaks (which include the Kumbhakarna and Kumbhakarna East. A moderately difficult trek, the sandakphu trek can be ideally visited during the winters.

Mount Nanda Devi is the second highest mountain in India with an altitude of 7,816 metres. The Nanda Devi base camp trek is known for its jaw dropping views of some famous Garhwal Himalayan mountains like the Nanda Devi East, Mount Trishul, the Paanch Chuli Peaks and Mount Nanda Kot. The trek leads one through Martoli, Rargari and Munsiyari, all known for their spectacular views of the mountains. Despite being a moderately difficult trek due to the steep and narrow terrains, it is one of the most sought after treks in the country. The months of July to September are the most suitable to visit the trek.

Considered to be one of the most beautiful treks in the country. The Chadar trek will take one through numerous alpine meadows, valleys filled with different wildflowers, streams. And glaciers and what not. The trek covers more than seven famous lakes. Namely the Dal lake, Vishansar lake, Gangabal and Nundkol lake, Yamsar lake, Godsar lake etc. A perfect monsoon trek, it can be ideally visited during the months of July to September. Since it is a moderately difficult trek, it requires relevant skills and expertise and is not suitable for beginners.

The unusual places near Kedarkantha

The details of the Kashmir package

What makes the Kashmir Great Lakes Trek, the Greatest One!
Next Article 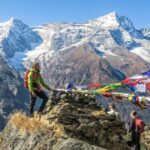